Being released the same week as Maestros #2, Image Comics is releasing a UNIQUE foil cover for Maestros #1 for Local Comic Shop Day®.     The title and border will both be foil.

The Maestro and his entire royal family have been murdered. Now, his banished son from Earth will inherit the Wizard King’s throne along with a spell that turns its user into GOD. With enemies everywhere, will this Orlando-born millennial be able to keep his new magic kingdom?

From STEVE SKROCE, the storyboard artist of The Matrix trilogy, the artist and co-creator of WE STAND ON GUARD and Doc Frankenstein, the writer / artist of Wolverine, and the artist of Amazing Spider-Man and ALAN MOORE’s YOUNGBLOOD.

“MAESTROS is a masterpiece, with one of the best first issues I’ve ever read. Steve is somehow an even greater writer than he is an artist. Get ready for your new favorite comic.” -BRIAN K. VAUGHAN 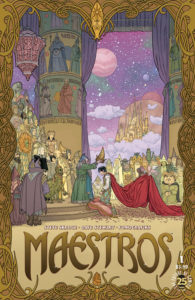